Since losing our little friend, my family and I have been making an extra effort to help Misty out. She's kind of lost herself. Buddy was her best friend, and she sometimes will be looking for him or sitting out in the yard staring at his favorite place to lie down. So, we decided that it was time to get out of the house and take her somewhere new.

Last Saturday we took a trip up to the Provo River Falls, way up the canyon on the way to Mirror Lake. It's one of my favorite places in the world, and was one of Buddy's favorites too. Misty had never been there without him, and I hadn't either. It was strange, but it was a good place to think and get things straightened out in my head. Here's a bit of a glimpse of our trip:

We stopped at the Fish Hatchery, mostly because I was so car-sick that I could hardly move. There was no one there, no tours going on, and not very many fish. So, Misty led the way to a wooden deck overlook. She was quite interested in the small, brown rock-chucks and red-winged blackbirds that were scampering about the ground and sky. See all of those little brown dots in the second picture? Rock-chuck playground! 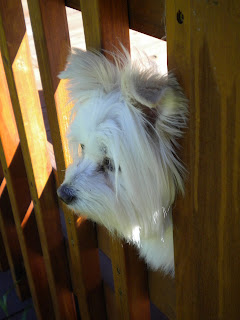 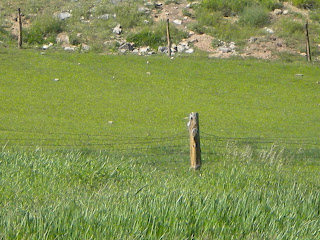 I have been to the falls five or six times in my life, and never has the water been this high. It was kind of a bummer because we couldn't wade very far in, but it was exciting because it means that the drought is over! Utah has been in a drought for about ten or eleven years. This is the first year we've actually had our reservoirs and rivers full to the brim. 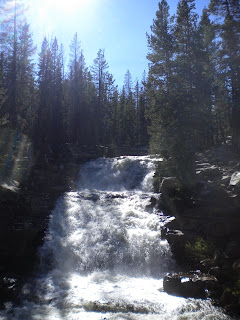 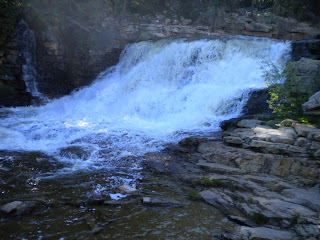 Misty wasn't phased by the high water. Once she saw me and Mandy up to our knees in the water, she took it upon herself to rescue us. The only problem was that the water was much colder than the little puppy expected. Here she is after her first shocking leap into the river. Smile pretty, baby! 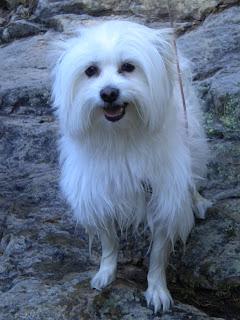 Woman in a Window said...

She looks pretty content there at the end with the quizzical turn of head.

She is beautiful and I am glad you are helping her to adjust. I hope you are doing ok.

Sarah Anne
Utah, United States
There was a little girl who had a little curl, right in the middle of her forehead. And when she was good, she was very, very good, and when she was bad...she was horrid.

This work is licensed under a Creative Commons Attribution-NonCommercial-NoDerivs 3.0 Unported License. © Georgie K. Buttons and "The Author's Desk", 2010. Unauthorized use and/or duplication of this material without express and written permission from this blog’s author and/or owner is strictly prohibited. Excerpts and links may be used, provided that full and clear credit is given to Georgie K. Buttons and "The Author's Desk" with appropriate and specific direction to the original content.